The absolute minimum hardware requirements to port EmuTOS to a 68000-based micro are straightforward enough: all that is needed is upwards of 512KB of RAM, about 256KB of ROM and some kind of character IO device. Of course such a setup would not be very useful as it would have no GUI or storage, only a not-very-useful command-line, called EmuCON,… Read more »

The build of the MAXI000 board continues. The first job was to finish the quad UART construction. The RJ45 and RJ10 sockets and the MAX238 (PDF) with its associated tantalum capacitors were all attached without any difficulty. After fixing a dodgy joint, caused by there being not enough paste on a corner pin on the MAX238: success. The bootloader was… Read more »

The IO boards arrived about a week after putting the order in. The front of one of the boards: And the back: Interestingly I received two extra boards. An extra usable board and another one. The other board had been used for some kind of testing by the manufacturer as it had a piece cut out of it. The box… Read more »

This blog post does not document what I’ve done in my hobbies, except for some small projects, but rather what I plan to work on next. Before getting to that though, I should finish my description of the progress I’ve made with the VGA controller. I have attached the  EPF10K10 (PDF) FPGA to the 68000 CPU bus, and have had… Read more » 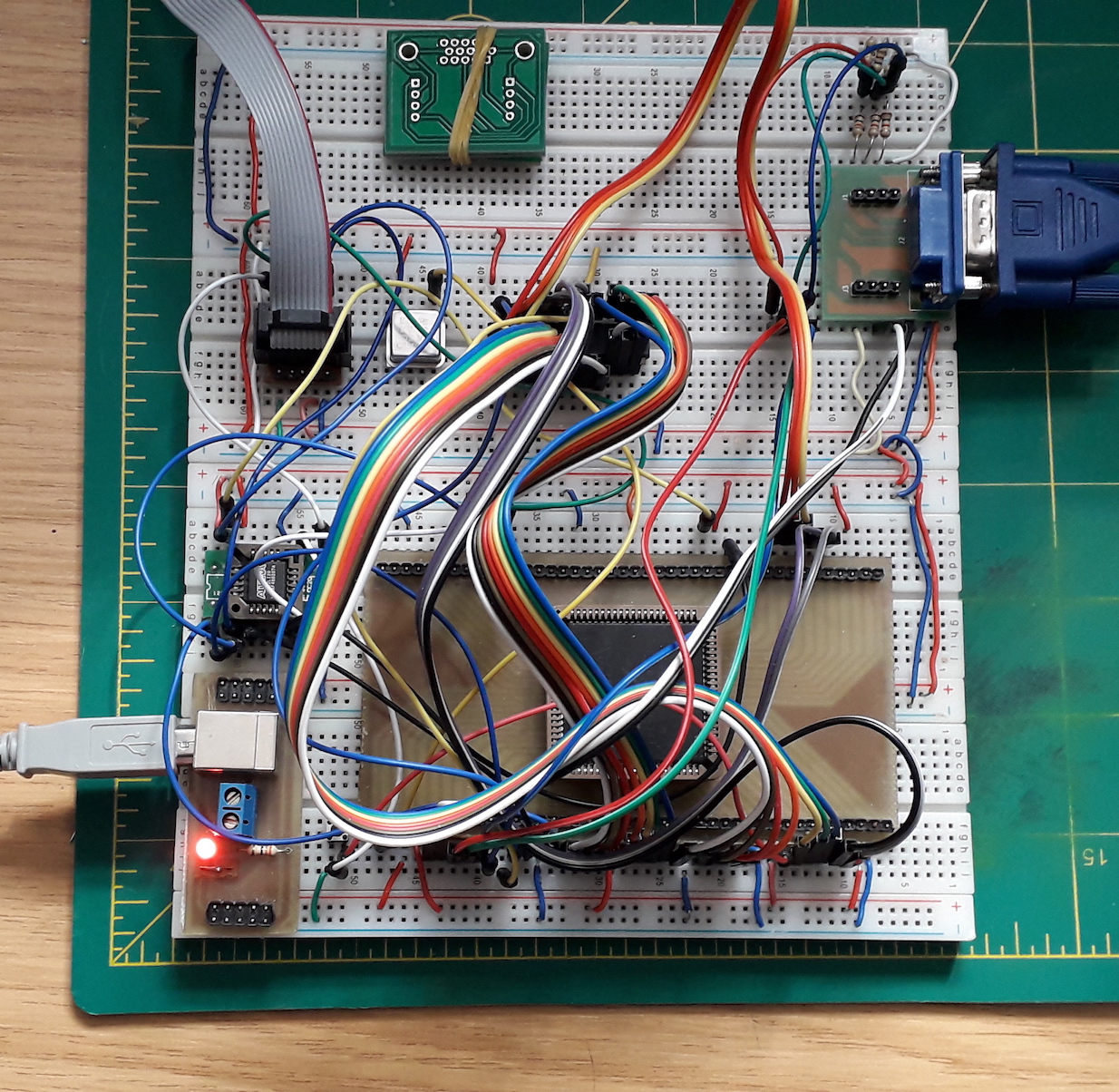 This post has been a long time in the making. I’ve been distracted by various things: work, family, and CNC related projects. I will create a short post describing my first successfully completed CNC project after this one, since I’m pretty proud of it. But onto the topic at hand. The road to a video display began with a stand-alone breadboard… Read more »

After writing about building a 68020 computer I feel slightly silly for going back on my word: I have built up a 68008-based computer on breadboard. For one thing going right to a 68020 felt a bit like I’d be missing out; the pleasure is in exploring not the end result. I’d have left out on the other MPUs in… Read more »

It’s been a while since my last post. The main reason being a house move. On the plus side this is good for my projects as I now have lots more room to work on them. On the negative side, at least as far as my hobbies are concerned I’ve, somewhat unexpectedly, found myself doing some work for my old company…. Read more »

Looking again at the VHDL for my interrupt router, I realised that adding a priority encoder was fairly simple: Instead of being the masked and active interrupt lines, ROUTED is now the number (bit position plus one) of the active line. 0 is used as a special case: no interrupt lines, which are exposed by the mask, are active. This… Read more »