As mentioned at the bottom of the previous post, I’ve been designing a new 32 bit processor, and this post is concerned with the design of that processor’s Instruction Set Architecture. The objectives for this project are as follows: To learn as much as possible from the experience To leverage what I learned making my previous 16 bit processor To… Read more »

Whilst I did attach the graphics card to MAXI030 it was only to confirm that I could turn the card’s LED on and off. The VHDL for the Cyclone FPGA is in a sorry state and needs major work before I use it in any kind of meaningful way. Continuing on with MAXI030 my first port of call was to… Read more »

While working on the design for MAXI030 I completed another project: a new workbench microscope. After watching various videos on the topic, I came to the conclusion that a setup with just a camera and large TFT screen would be best for me, ie. one without eye pieces. I have various things wrong with my eyes, including poor stereoscopic vision,… Read more » 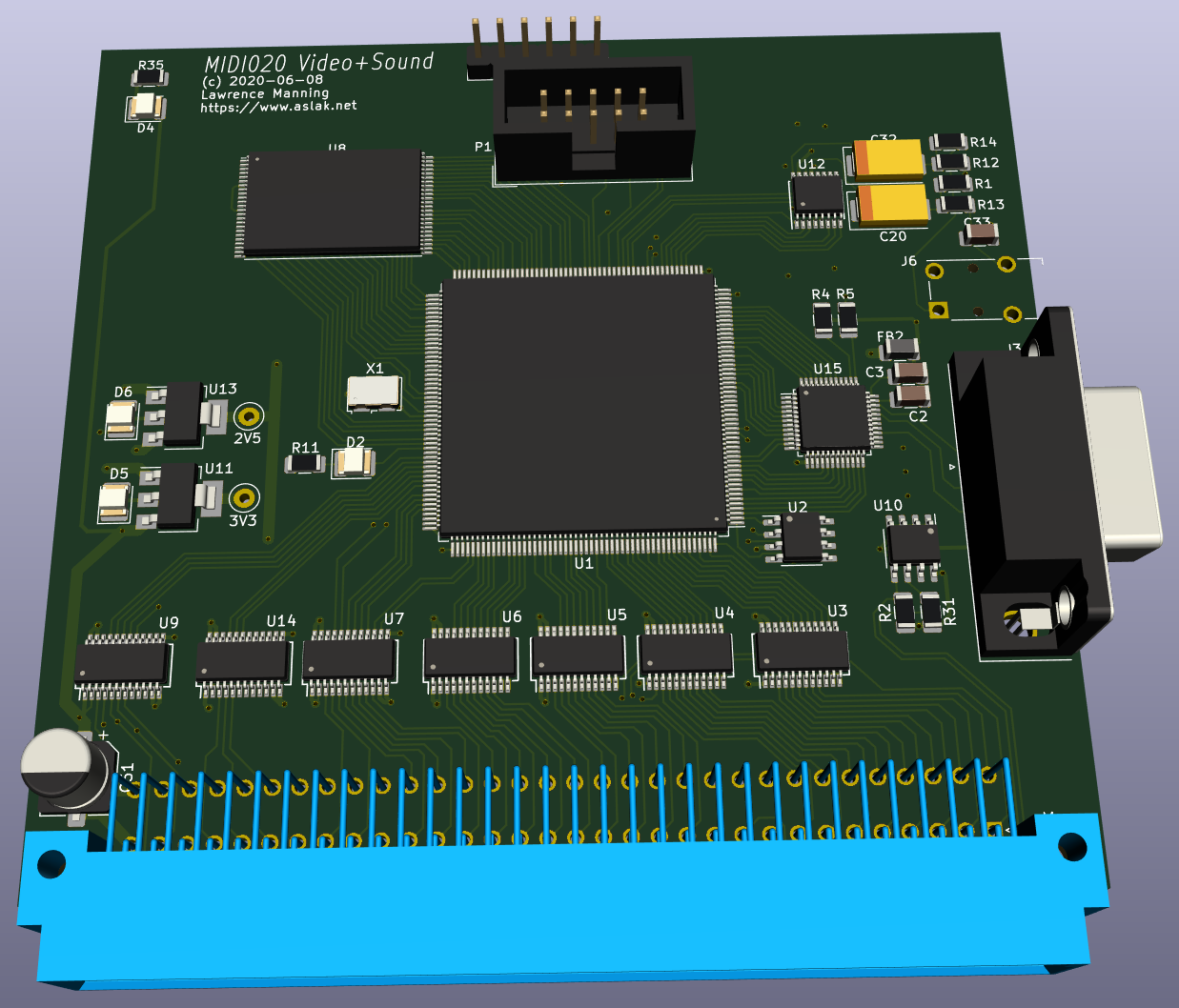 For the last few weeks I’ve been working on the design of a video card for my 68020 based computer, MIDI020. Though it will principally be a video card, it makes sense to include sound generation functionality as well, and I’ve been looking at a couple of approaches to this. Though I could look at using an FM synthesis IC,… Read more »

The build of MIDI020 is nearly finished. There’s been some hickups along the way, but I have managed to overcome them. My order to jlcpcb.com consisted of three boards: The MIDI020 main board The Test+SRAM expansion card The Ethernet+Printer+Joystick expansion card To make things interesting, and because I wanted to try them out, each came with a solder paste stencil…. Read more »

I2C, I²C or Inter Integrated Circuit is a synchronous serial protocol designed by Philips in the early 1980s for linking together ICs on PCBs so that they can exchange data. It operates in the same area as SPI, which I’ve talked about in this blog a few times. I’ve also talked about I2C before though not for a long time…. Read more »

The physical construction of MAXI000 is complete: It looks good with the SIMM installed. I first attached the joystick parts. Testing the 9 pin Atari joystick went exactly as expected, as did testing the buttons on the Game port joystick I have. After writing a quick test routing for the SPI based MCP3002 (PDF) ADCs, I quickly encountered a problem… Read more »

In my previous blog post I talked about some of my goals for a simple 16 bit processor implemented in VHDL and running on an FPGA. Here is a diagram showing the top level design, as generated by the Quartus tools: For clarity the Control Unit and associated muxes are not shown; the remaining parts, plus the muxes, constitute the… Read more »

During my A-level electronics class I studied many interesting topics including: Basic analogue electronics including Ohm’s law and bipolar transistor switching and amplification circuits Boolean algebra Digital design using 74 series parts Assembly programming with the 6502 The 6502 assembly programming was particularly interesting because it was hands on using some teaching boards that consisted of a 6502, a tiny… Read more »