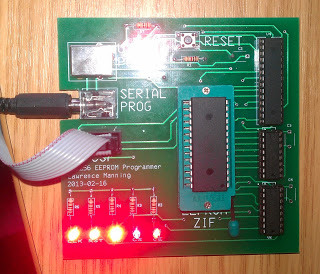 The next “milestone” for the 6809-on-a-breadboard computer project is to gain some RAM.  Computers can’t do very much unless they can store things. This was fairly easy, though I did have to fix one problem with the current circuit.  I need to do some more research on this subject to understand the issue fully, but briefly… Previously, in the EEPROM… Read more »

Now that I can reliably write data into the EEPROM, the next step is to build the simplest possible working 6809 computer, in order to test my knowledge of how a system built from a 6809 should function. After looking at how Ben Ryvers built up his Z80 based computer, I decided to borrow some of his ideas for a… Read more »