It’s been a while since my last post. The main reason being a house move. On the plus side this is good for my projects as I now have lots more room to work on them. On the negative side, at least as far as my hobbies are concerned I’ve, somewhat unexpectedly, found myself doing some work for my old company…. Read more »

Ever since I fired up my first 6809-based computer, I have wondered about the possibility of running programs written in something other then assembly language on it. Not that I don’t love writing code in assembly. But for interests sake, and because it could be a different kind of fun, I’ve been curious about running code written in higher level… Read more »

There’s not been as much progress over the last few, actually six, months as I would have liked. The good news is that I now have a whole load more time available to work on my projects, including MAXI09-related things. So expect many more blog posts in the coming months! There has been some progress on the OS which I… Read more »

I have restructured the source code tree for MAXI09OS. Source files are now grouped in directories, with a directory for drivers, another one for the core of the OS, etc. The assembly source files are no longer stuck in a single directory. The makefiles are, by necessity, a little more complex as a result. After toying with using make in… Read more »

Looking again at the VHDL for my interrupt router, I realised that adding a priority encoder was fairly simple: Instead of being the masked and active interrupt lines, ROUTED is now the number (bit position plus one) of the active line. 0 is used as a special case: no interrupt lines, which are exposed by the mask, are active. This… Read more »

The last few month’s free time has been spent knee deep in the Operating System for my 8 bit micro. The main area of attack has been on implementing a console (screen and keyboard) driver, but I’ve been working on a few other things as well. Up until recently I have not tried linking the code that makes up the… Read more » 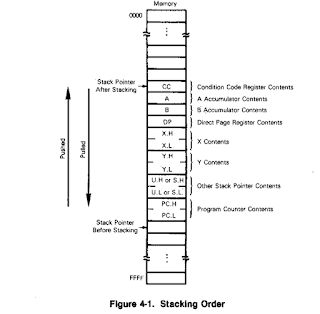 This past few months has been spent thinking about, and prototyping, ideas for the Operating System I want to write for the computer. But before talking about that, a summary of the other little pieces of hardware progress. Anyone who has viewed the video will be familiar with most of this.First up SPI. I have implemented a trivial SPI controller… Read more »

Physical construction of the MAXI09 PCB is now complete. A final, 3 hour, session with the soldering iron completed that task. Here is a picture of the top of the board: I have also found a solution to the problem of unwanted flux residue. After trying out various things including isopropyl alcohol, it seems that the best approach is good old… Read more »

Construction of the MAXI09 is continuing. With each part soldered onto the board comes a limited amount of testing with the monitor. Enough to exercise the very basic level of functionality, nothing more. Proper testing, and actually making the part do cool things, will come later. The first part added was the OPL2: Since this was previously prototyped on breadboard… Read more »

After a wait of only about a week and a half, I have now received five MAXI09 PCBs from Botech. Here they are in the wallet: I was surprised at how much they all weigh! And the bottom: As you can see, they look great. Especially noticeable is the silk screen which is beautifully crisp and clear. After doing some… Read more »